Kastor is a Hunter class Undead dragon in the Red egg lineage, their availability is Common.

Red Dragon: The dragon can render your towers useless.

Kastor has a hawklike face with bright scarlet scales and a noticeable underbite. There are four horns protruding from the lower jaw (two on each side) and two from the top of the head. Two stubs resembling horns also stick up from the forehead. Kastor's horns are beige, but soften to a buttery yellow at the end. Kastor has two bright creamsicle-orange eyes.

Kastor's shoulders are bunched towards the front, making the bodily stature much like a bison's, with long blood-red wing arms branching out from them. The membranes connected to the wingbones are huge, the color of rubies. They become more yellow in coloration at the bottom, almost like fire. Sliding down Kastor's back are beige spikes, and at the end they narrow to a single fire-colored point on the tip of the tail. The belly is plated with tangerine underscales.

Like most European dragons, Kastor upholds the general appearance; and has four legs and a pair of wings.

Fireball Attack- Tapping repeatedly on buildings will shoot balls of fire that deal damage and destroy. Unlocked at level 1.

Lockdown- Using this attack causes magic nets to fall over a building, rendering it unable to defend until attacked again by a dragon. Unlocked at level 2.

Kastor is a dragon from the Red Egg lineage. Kastor can be achieved in the breeding castle using the following dragon pattern(s): 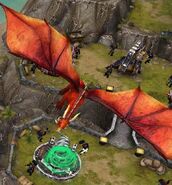 Kastor standing in the Dragons' Den
Community content is available under CC-BY-SA unless otherwise noted.
Advertisement