Trollis is a Hunter class Water dragon in the Purple egg lineage, their availability is Common.

Breath Wyvern: It doesn't really have arms. Neither did a T-Rex.

Trollis has a diamond-shaped head with a short spiked horn on the end of his snout and rounded horns that are not extremely prominent on the side, but sharper and larger towards the top of his head. He has bright, clear aqua eyes that are tiny and lack pupils. Deep teal fins protrude from the front of his chin like a beard, with pale peach-colored webbing. His body is bunched towards the chest, giving him a tall, thin stature. He has two strong legs and a pair of great wings; Trollis has no forelegs. The end of his tail is thorny and shaped like a spearhead, and his dark denim claws are triangular, but not hooked and rather straight.

Trollis' scales are a shade of lapis that seem almost like a beautiful pale denim. Darker indigo and purple stripes arrow down his back like a tiger's. His horns are the most prominent part of his body that is purple, mostly changing into the color at the crest. The webbing on Trollis' thick wings is indigo, almost navy.

Trollis upholds the appearance of a wyvern, having two hind legs and his forelegs replaced by huge blue wings.

Uses about 250 egg tokens. Breedable at level 4. It is advisable to raise Trollis to breeding level, then stop using him.

Trollis in the Dragons' Den 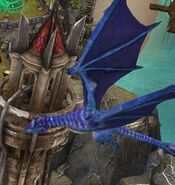 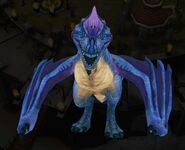